For many years DtMG e.V. has been accompanying our friends in Malaysia in their and our diverse cultural activities in all areas. Today I would like to present for the year 2019, a special initiative for mutual cultural understanding in the field of sport.
Played with enthusiasm in Malaysia since the early 1880s, the sport in focus is currently successfully represented internationally by its Malaysian national team: Cricket! 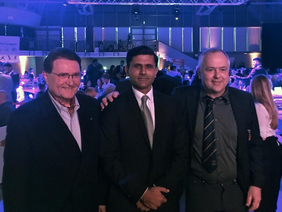 The roots of cricket in Germany also go back to the nineteenth century when clubs such as BFC Viktoria 1889 in Berlin competed for honours. In 2006, this same club provided the winners of the first woman’s cricket championships in Germany.
The chequered history of the German cricket tradition has many positive aspects which enable the organisational bodies of the increasingly popular sport to contribute to diversity and social cohesion within the German sports environment. Of particular note is the contribution that the various cricket clubs themselves make to social integration – in particular but not exclusively that of refugees.

The growth of cricket in Germany has attracted a lot of interest from across the country in this sport first formalised in eighteenth century Britain – despite the challenges the length of some formats of the game present for television and the sizes of the areas required for cricket fields. The increasing demands placed upon the sport’s voluntary organisers provide good grounds for the DtMG to lend its support to this vehicle for cultural exchange.

*A "GAN" - Gala Awards Night of the DCU (German Cricket Union) – is a celebration of sport and intercultural exchange which also provides a networking opportunity for cooperation in sport-centred social projects.
The following takes a look at the sport of cricket and how the DCU as an independent organisation has contributed over the past few years and sees its role going forwards. For sustainable success, new partnerships for European cooperation and the collaboration with other national institutions of Sport and the DOSB (German Olympic Association) within Germany are key.

The value and values of Cricket

As we are well aware, sporting activity offers benefits to both the individual and society. Participation helps improve or maintain health and fitness levels; it can aid personal development and provide fun, social contact and a sense of belonging. Sport promotes social integration, cohesion and inclusion as well as sporting values, mutual respect and mutual understanding.

With the benefits of a sporting mindset within an environment of increased transparency and directness, Cricket has something to offer everyone. As a primarily summer activity, it has complemented other sports such as football for many years in Germany – thereby ensuring that all year round team sport participation is available to everyone from university sides to families living and working in exclusive metropolitan environments.

the sport provides a great platform for intercultural exchange

Apart from general fitness and flexibility, cricket helps to develop hand-eye coordination, timing and even calculation skills! As a team sport, cricket is unusual in that when one bats or bowls, the levels of discipline, skill and concentration required are on a par with those demanded of individual type sports participants. Spread across all continents, the sport provides a great platform for intercultural exchange.

Members of the still relatively young DCU organisation are dedicated to getting people involved with cricket at all levels and to this end have initiated refugee and school support programs where, with the help of partners, participants received all the kit they need to get started. At the other end of the spectrum, some of the top players in Germany have been given opportunities to play in competitions abroad and to compete with and against some of the big names of the sport. Last year, North Rhine Westphalia (NRW) hosted the first German Premier League C10 competition where top players from Germany competed with and against world-class former international players. It was a great new experience for everyone involved including spectators new to the game.

Since the founding of the DCU in 2015, the founders are pleased to have been able to help raise the profile of Cricket in Germany and to accelerate the realisation of the sport’s potential in the country for everyone. Providing artificial wicket surfaces to a number of clubs in different regions, their greatest challenge remains getting access to and developing facilities – sports fields – suitable for hosting competitive cricket as well as training facilities to develop talented young players. Nevertheless, through collaboration with local authorities and other sports and institutional bodies, real progress has been made including training coaches and match officials as well as participating in sport-oriented social projects.